The publication date of the book and the dissemination program “The Volunteer Minister’s Handbook” (VMH) is December 1976. It falls in the period after 1972 where LRH was arrested in the United States, and the Scientologists had since no physical contact to him. The takeover team trying since then to cover up Rons absense and mock up Ron and all efforts to fake his issue lines and to imitate him. In these old days, they made bad mistakes, revealing their plot. So they later had to cover that up. I reveal that all:

The purpose of the Volunteer Ministers Handbook is to mockup a production, which is based largely on existing references (HCOBs, LRH Tapes, but also issues of the  management: BPLs), and thus, obviously, no new production of Ron, but the book also includes quotes from alleged LRH lectures from the 10. Dec. 1973 and 19. Febr. 1974 – called the instruction tapes – for example in the VMH chapter B – orientation checksheet, the outline of the VMH program, and to present section: “Volunteer Minister” and “Abilities of a volunteer Minister” and “Technology” on page 30 – 34.

These seem to be a transcript of 2 LRH-lectures, the tape labels suggest this: “extracts from the instruction tapes 7312TC10 and 7402MC19”. 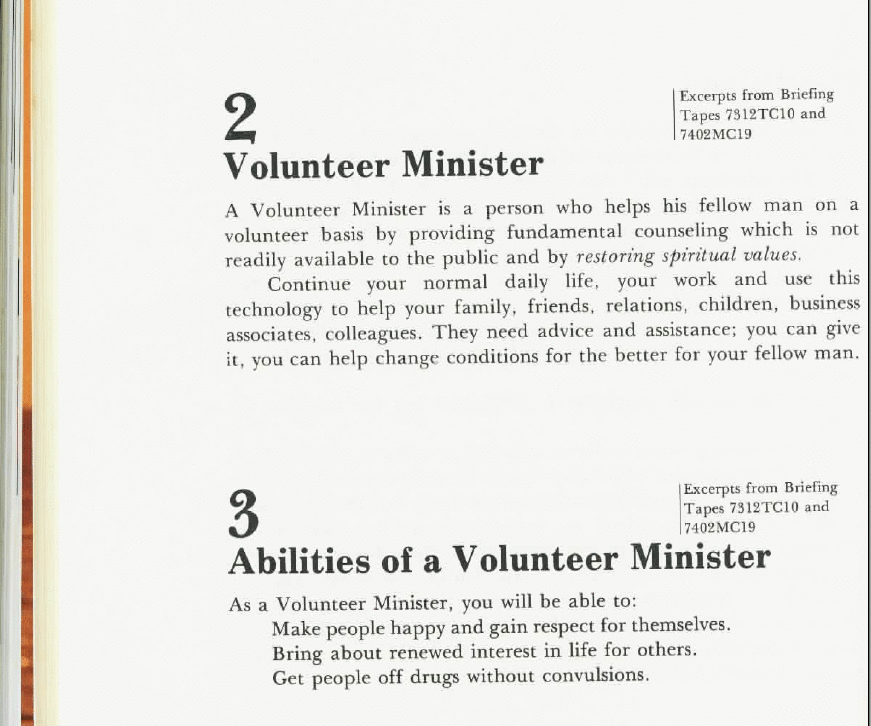 In addition, the publisher pointed out carefully in the page “How to use this book” (on Page 1, even before the table of contents) the difference between Source and secondary literature. As it is, etc “In some instances in the packs of this handbook an asterisk (*) appears against the reference for an item in the pack. This indicates the Material of that section was written by someone other than L. Ron Hubbard the founder of Dianetics and Scientology.” 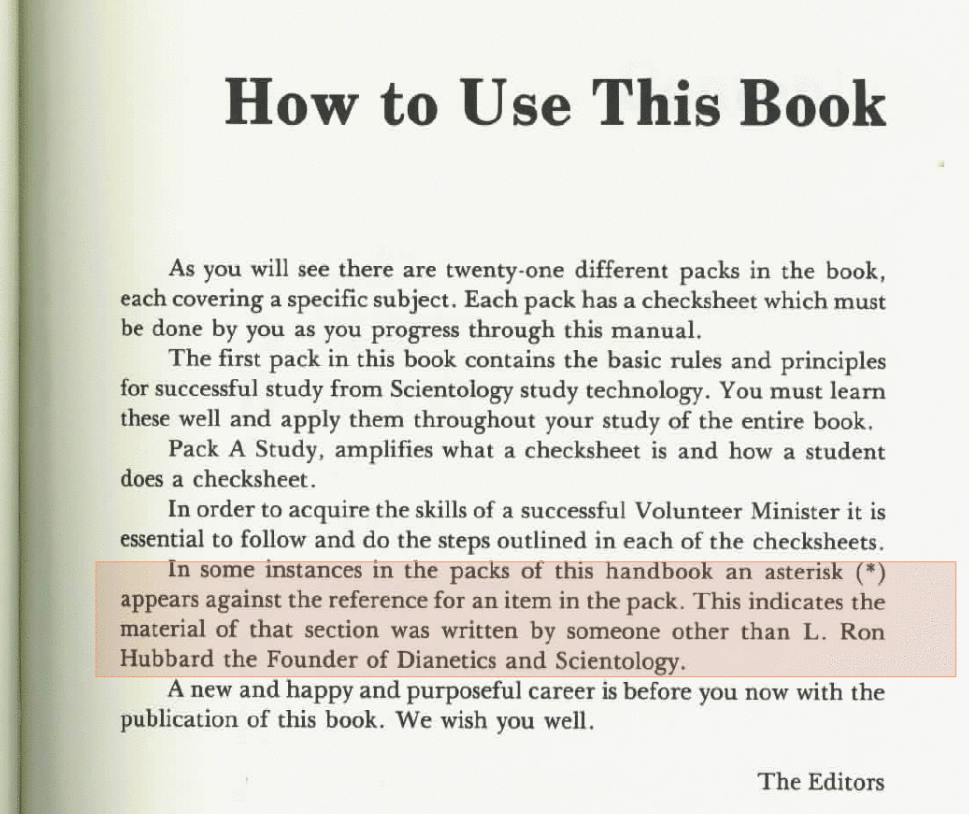 On page 570f you can read the source information to the said section B: no asterisk! So alleged all texts by LRH, his instruction tapes! In contrast, on pg. 569 an asterisk for 3 references in the section D on the ARC: 3 Issues not by LRH, as if he had not expressed himself on the subject of the ARC to the public!?

So, if LRH has lectured even in the years 1973 and 1974 to us on the subject of dissemination, as here in the VMH claimed, where are then these tapes? Then I would like to hear the lectures and the  complete ones, not only excerpts! And so would others. And that’s exactly where a drawback was made! These tapes do not show up in the list of materials in the book “What is Scientology?” ! Neither in the 1977 edition, nor in the edition of 1991! 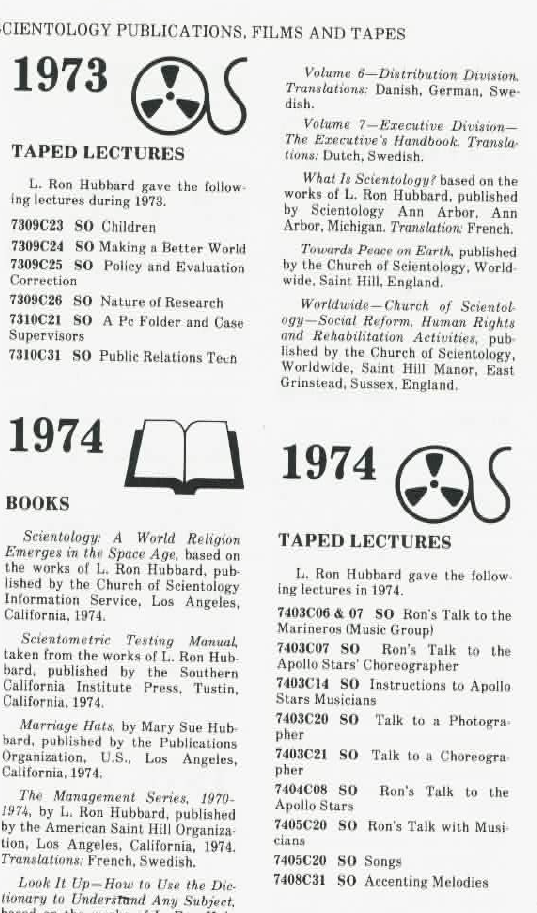 Similarly, by the way, the “disappeared” alleged LRH lectures from 1973 (6-Sea Org-Tapes) and 1974 (9 further Tapes): In the 1977 “What is Scientology?” they are still listed, in the 1991 not! The fake of the tapes of this time was too obvious, so that they have been taken out from the publication. In the case of these Sea Org-Tapes, you may not care about them, which public needs these Tapes, however, the VMH is intended for the general public and is the basis for an extensive dissemination campaign: one or the other public should  ask, want to listen fully to this lecture. If he insists, I am sure he will end up in Ethics.
After all, there are so absurd positions in that lecture, such as this:

Is this supposed to be by LRH, who has often talked about “Psychs and Priests” who are our enemies? – Our main task should be to send our people in these churches?! This is strong stuff! This is the beginning of the creation of “The Scientology Religion” (see more on this here: Scientology, IRS brand: “the Scientology religion”).

Even if it is today possible to counterfeit a lecture in the voice of another: at the time of the 1970ies it was not technically possible. So the former attempts to cover up the disappearance of LRH were still quite dilettantish and apparently were later corrected by letting disappear these tapes. But still there are traces of the existence of these counterfeits: The Volunteer Ministers Handbook!

In the beginning 1990ies however there was a Sea Org Mission in all the Orgs, to hunt and to destroy all existing copies of the VMH. At that time a reason was given  for this that in this book, Non-LRH issues are included. Shortly thereafter, the Scientology Handbook was issued, this time – in contrast to the VMH –  not indicating the references on which the Chapter are based. Here it was made even harder to separate the chaff of Out-Tech from the wheat the LRH Source material. – The real reason for this eye-catching book-burning was obviously to cover-up the dilettantish forgeries in the advent of the “14 missing LRH-years”.

At this point, you should not let go of: Because if the counterfeiting of LRH can be proved for the years 1973 and 1974 how credible are then the radical technological changes of 1978 and 1979?