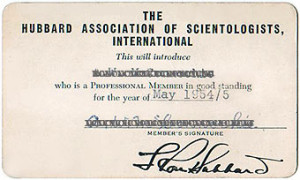 HASI was founded in Switzerland to achieve the best security possible among the nations of the world. Thus the foundation protocol was done in German, one of the 4 official languages in Switzerland: German, French, Italian and Rhaeto-Romanic. See at the bottom.

The reason for the new foundation was explained in the meeting and reported in the protocol:

The Auditor and case supervisor Andreas explains the need for the establishment of the Association:

L. Ron Hubbard originally founded the Association HASI in 1952 to spread Scientology and to bring it into application and offered Scientologists an association and thus the protection of a strong group.

HASI was in possession of the Copyrights and thus the Scientology Scriptures, and should protect from from changes and distortions.

1977 attacks were driven by the FBI raids against the Guardian’s Office (GO), the leadership of the GO was indicted for the activities of an Agent Provocateur and Mary Sue Hubbard and other GO executives ended up in prison because nothings. In this enturbulated time without a defense, the Association failed to hold the annual meeting of the members of the HASI, so that the register court dissolved HASI in may 1977. Thus the writings and Copyrights went into public domain, as the owner (HASI) did not exist any more. The formal basis for a legal takeover of the Church was laid, culminating in the establishment of RTC, CMO, CSI, ASI, IAS, SMI, and other similar organizations, which all are not based on LRH Policy.

Later a replacement for HASI was founded: The IAS (note: this time, the HASI without Hubbard) missed it until today, to protect Scientology against the take over and the changes of the scriptures. In fact, thousands of Scientologists that wanted to stay true to Hubbard and his technology have since 1982 been SP declared without proper legal procedure (comm ev) and IAS hushed.

Therefore HASI has to be newly established, in order to provide protection to upright Scientologists, who want to reorganize themselves, to do their jobs as auditors, as instructors, as ministers, as managers, administrative staff, field auditors, FSMs and where ever you want to be on the Orgboard or as Publics.

In order to strengthen this community in temporal and personal terms urges the cooperation of interested individual to a Corporation with its own legal personality. Switzerland is the ideal legal basis for this international oriented organization. Also the political situation could not be better: Switzerland had never had a witch hunt against Scientology or Scientologists and the state is like no other one independend regarding the New-World-Order aspirations of the United States Empire.

The Association with a non-profit purpose represents as an entity, the most appropriate legal form.

The founding members fully agreed with this reasoning.

Posted in Blog and tagged HASI.