A series of fakes on the Scientology Axiom 28 COMMUNICATION got my attention. A lot of confusion had to be as-issed:


It gives an explanation for the cancellation in the header: “This HCOB was incorrectly revised by another on 24 September 1980, adding data which did not belong in Axiom 28. That issue, HCOB 5 April 73R, revised 24 September 80, AXIOM 28 AMENDED, is herewith CANCELLED. The original HCOB of 5 April 73, AXIOM 28 AMENDED, is herewith reissued.”
Although the alleged date of death of “LRH” was in January 1986 the new issue is again signed by “LRH” but refusing the former Revision of the same HCOB as “not by LRH”. And that one from 24. Sept. 1980 was also deliberately signed by LRH:


The first thing we can learn from that is, that someone high up in the command channel of Scientology takes the courage to commit this technical crime as here were issues not written by LRH signed “by LRH”:

“8. Issuing the data or information or instructional or administrative procedures without credit or falsely assigning credit for them to another.” (LRH in the book INTRODUCTION TO SCIENTOLOGY ETHICS, copyright 1968, page 44)

The second thing we can learn is, that RTC is trying to hide this fact of faked issues, as in the New Red Volumes of 1991 they deleted all the explanations of reissues and revisions due to former found fakes (which you can read in a lot of loose leaf issues of the 1980ies). This is the issue from the New Red Volume X of 1991:


But that is still not the last revision. Let us take a look at “Scientology 0-8 The Book of Basics” in the version of 2007: 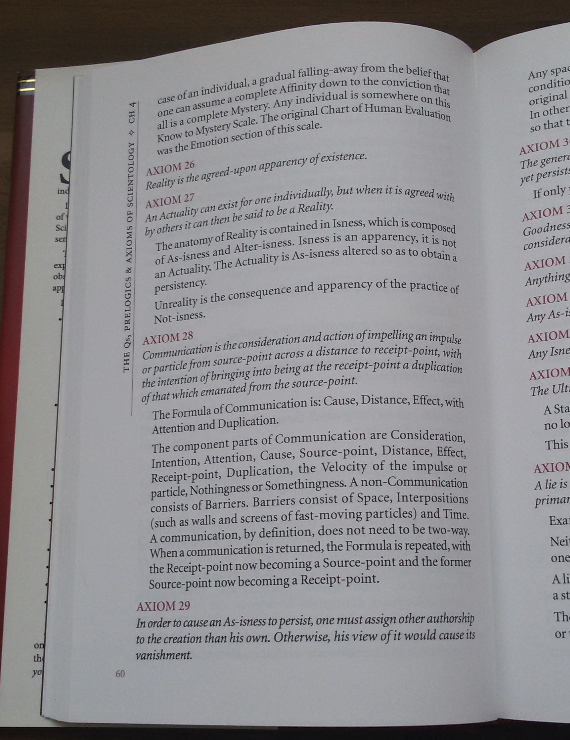 But let us see: What was the amendment of 5. April 1973 about? As this falls into the “10 missing months”, where LRH was definitely not on his communication lines, who issued this amendment? So we look up the “original” HCOB in the old Red Volume VIII on page 185 and find this:


So this was already reissued on 19. September 1974. What for? To change the signature to LRH. Weird. I can not find out, what the original signature said, as I have no access to access to the original loose leaf HCOB (if someone has such an issue, please send it to me).

Now the original Axiom 28 from the LRH-Lecture given on 20 August 1954 called “AXIOMS – (Part 3)”:
AXIOM TWENTY-EIGHT: COMMUNICATION IS THE CONSIDERATION AND ACTION OF IMPELLING AN IMPULSE OR PARTICLE FROM SOURCE-POINT ACROSS A DISTANCE TO RECEIPT-POINT, WITH THE INTENTION OF BRINGING INTO BEING AT THE RECEIPT-POINT A DUPLICATION OF THAT WHICH EMANATED FROM THE SOURCE-POINT.

So we know at least about the existence of 7 versions of the Axiom 28:

It it the introduction of the “UNDERSTANDING” into the text as shown here in purple:

AXIOM 28. COMMUNICATION IS THE CONSIDERATION AND ACTION OF IMPELLING AN IMPULSE OR PARTICLE FROM SOURCE-POINT ACROSS A DISTANCE TO RECEIPT-POINT, WITH THE INTENTION OF BRINGING INTO BEING AT THE RECEIPT-POINT A DUPLICATION AND UNDERSTANDING OF THAT WHICH EMANATED FROM THE SOURCE-POINT.

The formula of Communication is: Cause, Distance, Effect, with Intention, Attention and Duplication WITH UNDERSTANDING. The component parts of Communication are Consideration, Intention, Attention, Cause, Source-point, Distance, Effect, Receipt-point, Duplication, Understanding, the Velocity of the impulse or particle, Nothingness or Somethingness. A non-Communication consists of Barriers. Barriers consist of Space, Interpositions (such as walls and screens of fast-moving particles), and Time. A communication, by definition, does not need to be two-way. When a communication is returned, the formula is repeated, with the receipt-point now becoming a source-point and the former source-point now becoming a receipt point.

So the 1-Million-Dollar question 1)do we already got the hyper inflation? is: Is the amendment of “Understanding” in the definition of Communication not a correct one or is it really squirrel? One could discuss this endlessly as one might say: “if it can not be understood, then it is no communication”. The other might argue:  “When I get hold of an encrypted message, which I can not decrypt and understand at the moment, it is still a message or a communication. I can store this for a time later, when I might be able to decrypt and understand it.” For most people this discussion might find no end, they could not decide what is the correct viewpoint.

But we are Scientologists and can apply the axioms2)I quote the Axioms 21, 25, 26 & 28 but without the explanation to keep it clearly to this dispute:

AXIOM 21. UNDERSTANDING IS COMPOSED OF AFFINITY, REALITY AND COMMUNICATION.
…

AXIOM 25. AFFINITY IS A SCALE OF ATTITUDES WHICH FALLS AWAY FROM THE CO-EXISTENCE OF STATIC, THROUGH THE INTERPOSITIONS OF DISTANCE AND ENERGY, TO CREATE IDENTITY, DOWN TO CLOSE PROXIMITY BUT MYSTERY.

AXIOM 26. REALITY IS THE AGREED-UPON APPARENCY OF EXISTENCE.
…

AXIOM 28. COMMUNICATION IS THE CONSIDERATION AND ACTION OF COMPELLING AN IMPULSE OR PARTICLE FROM SOURCE-POINT ACROSS A DISTANCE TO RECEIPT POINT, WITH THE INTENTION OF BRINGING INTO BEING AT THE RECEIPT-POINT A DUPLICATION OF THAT WHICH EMANATED FROM THE SOURCE-POINT.
So when Understanding is defined as ARC and LRH then defined A, R and C in the following Axioms, it makes absolutely no sense to include Understanding in the definition of Communication, as this would be a circular definition, a faulty one!

To support the viewpoint of “Communication does not include Understanding” one could also look at the examples LRH gave for communication: also the bullet shot from a gun is a communication, no need to understand that.

The 3rd thing we learn from this is that LRH wrote down the Axioms in a perfect way in 1954, no need to amend them.

The 4th thing we learn from this: Already in 1973 someone committed the crime of faking a HCOB, especially changing the basic Axiom 28 on Communication and this fact was kept hidden by RTC till today, even after they had to give up the revision and put back the original Axiom. But they are protecting the scammer (as these are the Seniors of RTC in CST, the US-government), so that the scam can go on and on.

The damage of this fake appears not so big, there where more important fakes of Tech and Policy in the 1970ies and 1980ies: NED, NOTS, the disposal of the Clearing Course and original OT-Levels, the replacement of workable Dissem Tech by unworkable attempts, and many more I have published here.

But this fake HCOB 5 April 1973 AXIOM 28 AMENDED documents for us the year when LRH finally lost the control over the issue line of Tech and Policy. That was the year 1973 when the take over team (COINTELPRO) was already sure, that their fakes and manipulations can not be cancelled by LRH himself, as he will not get in control again over Scientology in that lifetime.