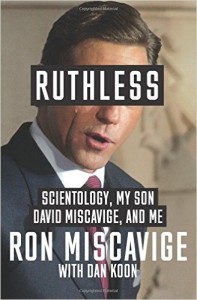 Just finished reading the book Ruthless, here is my summary. It’s an interesting book from the perspective of a father of the church, but not a whole lot of new material that isn’t found elsewhere. Frankly, this is more or less a rehash of Jenna Miscavige’s book (David’s niece & Ron’s granddaughter) albeit from a different perspective from someone that knew him as a kid to now.

At young age there are indicators that David was suppressive that Ron did not notice, and his father later goes into this in a later chapter. He does not explicitly call him suppressive, but he does reference an insight into his personality by referencing the “toxic personality” as described by LRH in 1953, as well as citing “The Socio-path Next Door” by Martha Stout, which suggests that yes, his son David is indeed a socio path. While one can take issue with his using psychological nomenclature and going into agreement with psychology as opposed to Scientology, regardless, by all indicators the accounts of many would suggest that yes, his son David is a suppressive person and certainly not in Present Time.

What I did find the most interesting was that at a number of times, Ron would give examples that, by all indications, suggest that David’s mother Loretta was likely a suppressive person as well. She was always antagonistic to Ron Miscavige, though she was great with kids he justifies. They got in fights which were physical, but often she prompted the violence. She also didn’t seem to get much out of auditing. She also helped the cops with a fake charge that Ron Miscavige raped someone (around 1985 in the Portland Oregon lawsuit) and she had no regrets and saying that she believed he was capable of anything. True, it’s also from Ron’s perspective so he may not be painting her in the best light or exactly how it happened, but considering that a suppressive person is overwhelmed by another, the point here is that it is possible that she overwhelmed David. Maybe not but this was something not focused on much and gives insight into David’s personality. (Side note, this charge also implies that CIA was trying to take out Ron and by extension David and the church with a fake rape charge. So while there are indeed legitimate enemies to the church, David created many more than there were before).

That said, Ron also says David is probably in LRH’s valence, in that LRH was at times a frothing, screaming madman who could be demanding, but could also be very sunny and pleasant whereas DM never was. (This makes me wonder if it really was LRH as his personality seems different post 1973 even per Ron’s accounts). Naturally, Ron criticizes Hubbard and the authoritarian aspects, and says it’s not a science, and that it’s a cult. He goes after the Aleister Crowley part, his WWII records, his marriage and not crediting philosophers. I chalk this up to ARCx and only seeing the mainstream critical data out there, but I don’t entirely fault him as I think many people in the independent field have gone through this phase, and objective data is hard to find that looks at all sides. That said, he’s still overall positive of LRH in that he says despite his flaws he really did intend to help people, so LRH was the lesser of the two evils at least. In other words, he is happy with the philosophy, finds LRH mostly good though flawed, and was disorganized at the end of his life. Even Ron seems to think that the circumstances of death and power transfer are suspect.

Ron is mostly in favour of the tech and explains various aspects of it like assists, clay demos, TRs, auditing, listing and nulling, word clearing, Sea Org, Flag, Apollo, GO, OSA, Golden Era, IAS, etc. He gives a really good overview of all the subjects and terms in a concise manner for the layman to understand. He does, however, criticize the Truth Rundown from 1985 as mind control by LRH (though I always thought this was a DM concoction as it came so late and it is suspect since LRH was hardly around at that point… I digress).

So how David rose to power according to Ron: Dave became a CMO and lots of kids were in this position, which held a higher rank above some senior Scientology members. The high level of power and status being more important than experience was what Ron M. believes caused change, in that power corrupts and absolute power corrupts absolutely.

One by one David the begins removing people. Stat pushing is manipulating the statistics to make it look good, and Dave did it even at a young age. (Really reminds me of Richard III by Shakespeare by the way as he forms a coup).

“Power is not granted. It is assumed.” – David when he had an asthma attack in 1980 has this prophetic realization

Another thing that I think is interesting is that Ron says LRH did not leave a plan for David to take over on p 146 as per the way things shook out. This is very odd, considering Hubbard’s character. By all indicators the Broekers were the actual people left in charge, according to Ron. (I think LRH was removed in a hurry – the status of the wills indicates a power struggle and cover up: http://www.wiseoldgoat.com/papers-scientology/hubbard_vs_nwo1_lrh-whereaboutsd.html#threewills )

Ron Miscavige also explains that David slipped by due to the goodness of people not seeing this personality type:

“The impulse to help is strong in most people, and I think it exists in the greater part of humanity, but there are also a relative few among humankind who would use people’s kind heart and good intentions for selfish ends. You could even say that good people are flawed because they have a hard time conceiving that others are not also basically good and therefore can be deceived.”

On a more positive note, he does give attention to the fact that there are people practicing it outside of the church via the Freezone and independent groups (such as the Dror Center, Ron’s Org not mentioned directly but are obvious which ones he refers to for those in the know on the subject). It at least makes some people aware that there are alternatives other than the church, which is a first for any book aside from Going Clear – which basically dismisses one and all Scientologists alike.

Lastly Ron poses 3 church reforms needed: end disconnection, grant amnesty to all with no strings attached, and end the IAS/fundraising. I would agree that these would be helpful to at least change the perception and undo some major damage. I’d also add, remove David and remove the alterations in the tech.

Overall, this is a more positive book that has come to light. I’ve not yet read Leah Remini’s book “Troublemaker” but after a while they all start to read like the same thing. I’d be curious what anyone else thinks about that book or this one.

You can order the book here https://www.amazon.de/Ruthless-Scientology-Son-David-Miscavige