The C/S Series 53 is one of the most changed, altered, faked and destroyed LRH

Quentin Hubbard was the most prominent casualty because of this black tech. 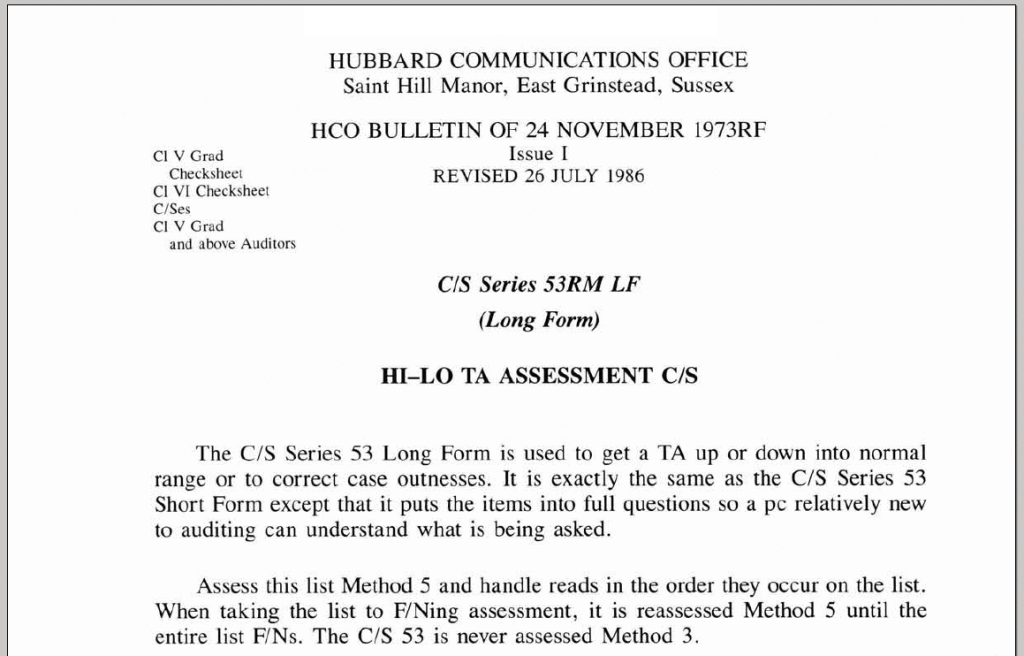 But even more to it: I found this very suspect, as it falls into the time, when LRH already had vanished. So I took a closer look: The earliest issue I could find of this date 24 Nov 1973 was this HCOB24 Nov 1973RD, revised 6 February 1977: 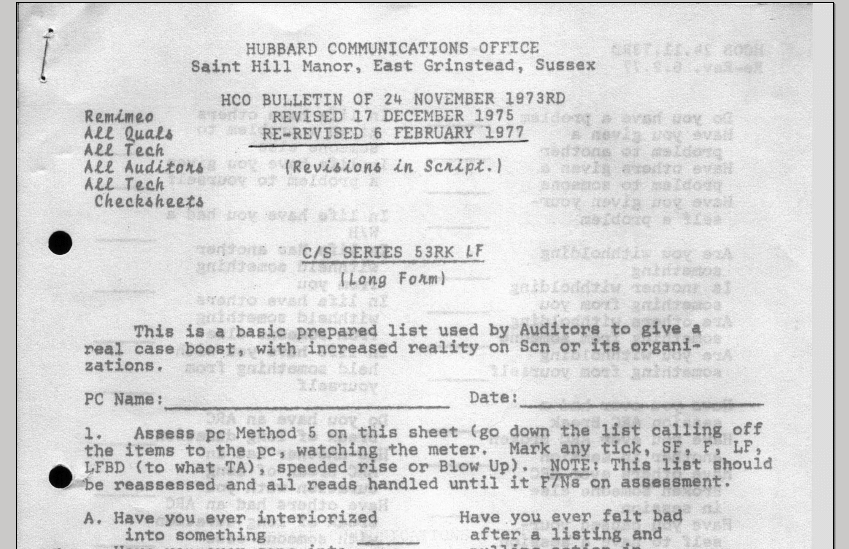 So a dozen revision within just 3 years!? That is not LRH-Style. I could not find an earlier one. But look at the first sentence and its purpose: “… to give a real case boost, with increase reality on Scn or its organizations”. What a bullshit! How should a Hi-Lo TA assessment achieve that? And it even lost its title telling you that!

So I looked on my Hard Drive for any issue with the name HI-LO TA and found a fore runner of this issue: 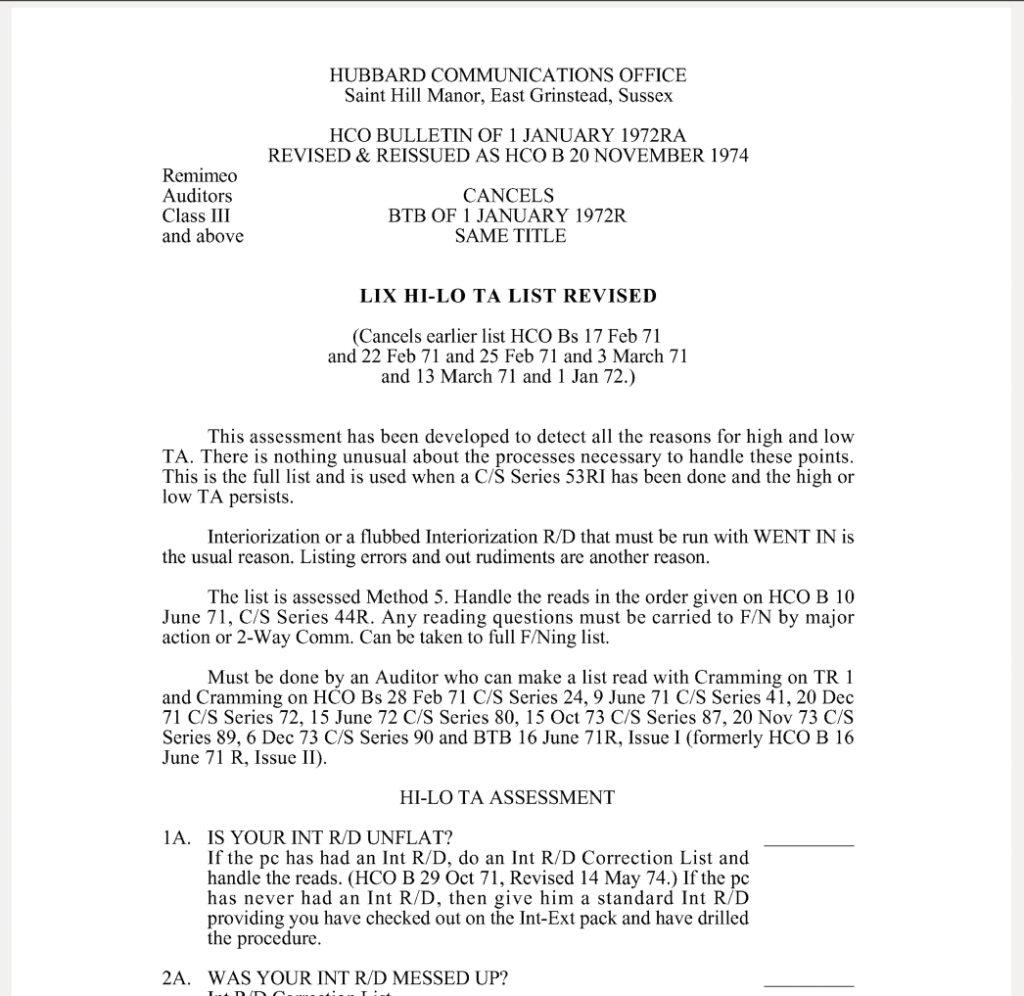 So lacking more information I took a look at the content pages of the Index Volume of the Red Vols and found this, all the C/S Series up to number 85 was written by LRH in the years 1970-1972, here the page mentioning the C/S 53: 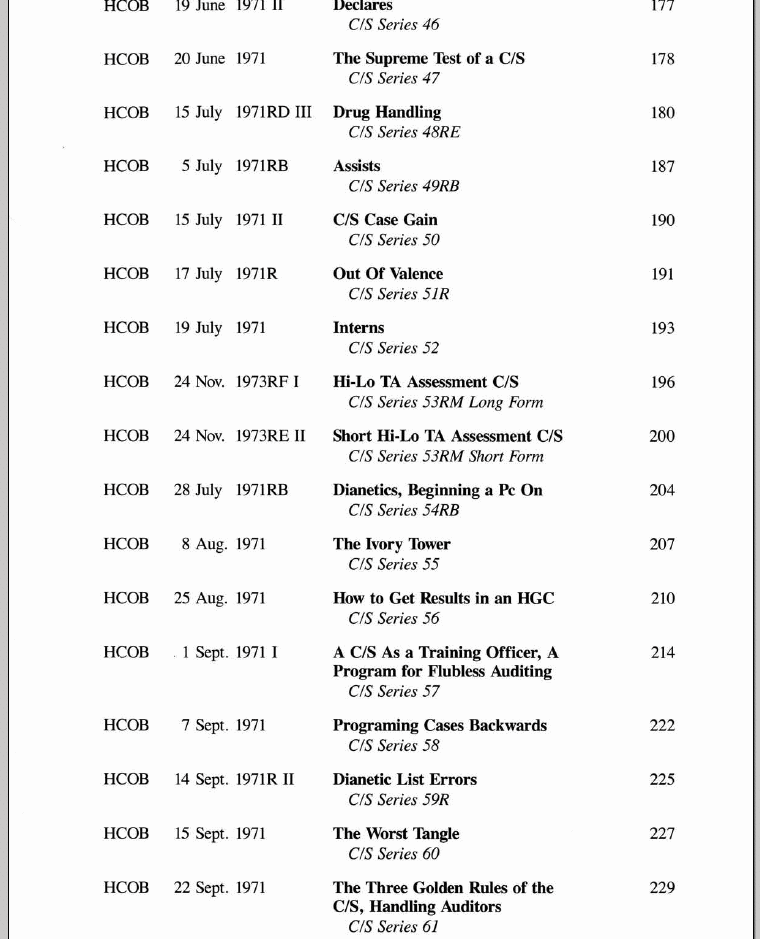 So I was able to find the real original:


A very simple and small list on one page, additionally to the Falls of different sizes, you should also take up speeded rise or Blow Ups. Essentially you are looking for 7 cases: Int, List Errors, WHs, Drugs, Engram problems, same done already and other practizes, only 27 questions. And not need to bring the whole list M5 to an F/Ning list as all the later revisions demand.

To bring the 100+ question-list of the CIS Series 53RM to an F/Ning list does not only drive PC and Auditor crazy but leads one to the idea to avoid that helpfull HI-LO TA LIST at all.

From Quentin Hubbard, Class XII is reported by his Flag Qual Sec, that he admitted he had falsified his worksheets, to report the C/S 53 list as F/Ning: “I mean I always false report when I have to FN a 53. I disagree with having to do that on pcs. It never does anything for the pc and it costs him hours of auditing. I think it’s better to just false report and get on with it.” With this he was at risk, that his certificates were cancelled. But he insisted on his integrity and not to apply an Intensive of “No Auditing” on his PCs. Perhaps after that he tried to contact his father to sort out this out tech. Who – if not Quentin – was in the position to insist to contact his father in person? As his father was replaced by a Doppelgänger Quentin had to die before he could speak out what he had found. See The Quentin Hubbard autopsy shows – he was murdered

I go back to 1971 and use Ron’s original C/S 53 as shown above, instead of any of the many questionable revisions.