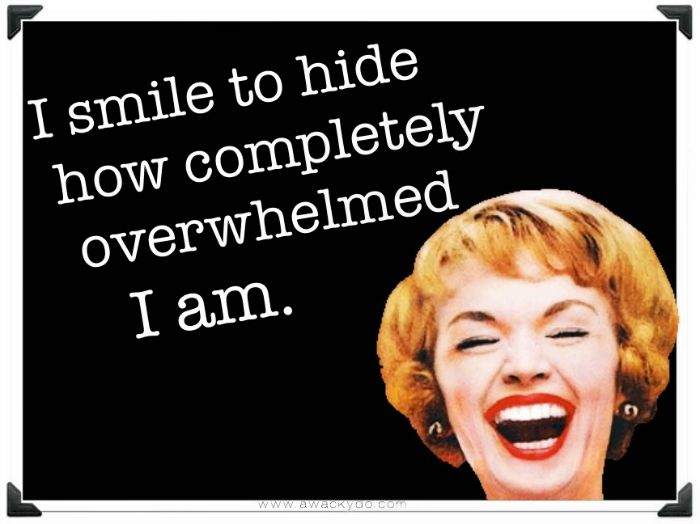 If you want to overwhelm Scientology with Entheta, just apply what you have learned from LRH:

Here then is the cycle of a group receiving an engram: the group ideas and rationale in handling or attacking MEST receive a shock from the MEST which it is attacking, making an emergency situation exist. There is a turbulent area created between the ideals and rationale of the group and the MEST. The emergency status of the situation has to do with the compressed time—something obviously is happening so swiftly that a full use of communication is not possible and must be supplanted by arbitrary rules or commands. As soon as the emergency is over, it can be seen that an engram has been implanted in the group.

The clearing of this engram consists of an examination by the whole group of the arbitraries, which is to say the orders and commands which were issued without explanation and which demanded instantaneous action on the part of other individuals in the group. The person issuing these orders, or persons issuing them, should demonstrate how the situation existed and the why and wherefore of these orders. In this way the engram is cleared out of the group. Rational discussion of this situation and communication of the situation restores the ideals and ethics of the group. [THE DIANETIC AUDITOR’S BULLETIN Volume 1, No. 7 January, 1951 Group Dianetics]

As L. Ron Hubbard gave every staff member a hat pack, a purpose, statistics and admin training to work happily and self determined on his post, this is a fundamental basis for a thetaful organism. Only in an emergency as mentions in above quote one should bypass and give orders to his juniors and later run out the engram introduced by the emergency and handlings.

The receipt to change such a thetaful org to a black Scientology Org would be to create an ongoing emergency, which needs permanent orders. Or to replace the hatting and self determined work of every staff by permanent bypass and orders, which will never be explained. A black org would be a dying organism, in which bypass and orders are everyday routine without a chance to rehab the theta of the group.

The „Admin TRs“ were introduced by the takeover team as a BTB to change the OEC-based organism of self determined team members into a „New Wog Order“ (NWO), where everyone just tries to obey the orders from above. Such organization can be controlled from a single point (COB RTC or above) and gains entheta in every year this engramatic situation continues without a chance to destimulate. That is also the deeper reason, why Sea Org Member work 100+ hours per week, without 2D, better food than „rice and beans“ and „per command intention“: to deny any body rudiments (enough sleep, nutrition, sexual satisfaction).

Tech dictionary on „Admin TRs“: the purpose of these TRs is to train the student to get compliance with and complete a cycle of action on administrative actions and orders, in spite of the randomities, confusions, justifications, excuses, traps and insanities of the third and sixth dynamics, and to confront such comfortably while doing so. (BTB 7 Feb 71) 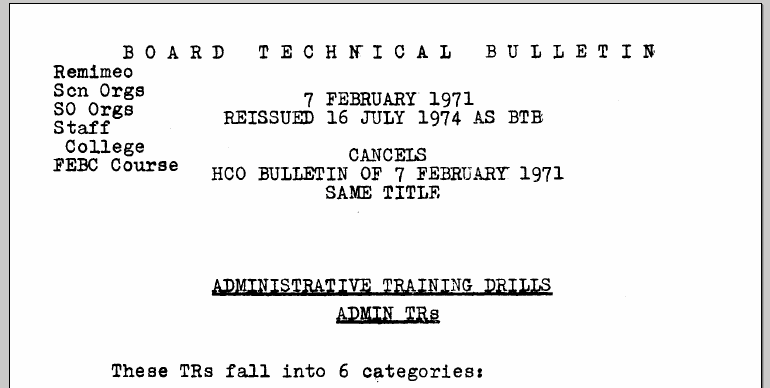 Every staff learned by these Admin TRs, that it is totally ok to give orders to the juniors and get them complied with even if this junior has „justifications or excuses“ as this interferes with his self determined plans, projects and to do lists (battle plans) based on LRH references.

Of course this BTB got later cancelled, as it was not by LRH with this issue:

HCOB 17 May 1980 Administrative Trainings Drills – Admin TRs – but this also was not written by L. Ron Hubbard as per the signature:

BOARDS OF DIRECTORS
of the
CHURCHES OF SCIENTOLOGY

And plus another change in the signature:

Assisted by
Training and Services Aide

Where the 1980-issue still mocks up LRHs contribution to upgrade a BTB to an HCOB, this was given up in 1990, one went back to the original BTB-issue, but nothing reminds today about this off-line authorship.

These Admin-TRs make the difference between the original Sea Org consisting of the best and highly trained auditors and administrators in Rons time and today a Sea Org based on “command intention” (another name for “anticipatory obedience”, a version of PTSness common in military organizations of empires, where you want to control the whole army from one single control point: the president). For such an organization you do not need any highly trained and audited personnel. In the contrary: it is easier to run the “Sea Org of Today” with young and unexperienced members, who have no life experience, no Scientology training and who sit in midst of their case in fully restimulation (which is the result of lean food, lack of sleep and lots of pressure).

In a danger it might be ok to bypass, but not as the everyday procedure in the whole of Scientology. This is the inverted application of LRHs Admin Scale:

ADMIN SCALE, “I have developed a scale for use which gives a sequence (and relative seniority) of subjects relating to organization:

Per LRH the goals, purposes, policies (Hatting), plans, programs and projects are more important than any order. – But the take over team created an importance of Stats and Orders senior to all other. With this new seniority they were able to create a NWO and got rid off lots of upstat and well trained Scientologists, who could not accept the daily bypass and patronzing.