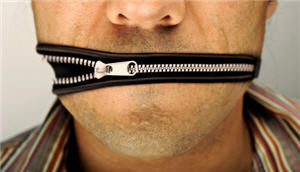 Here is a list of all LRH-lectures on tapes: http://freezoneearth.org/pilot/lrhtapes/lrhtapes.html

This is based on the “flag master list” distributed in 1978 and digitalized, updated and published by “The Pilot”.

I quote what he wrote about the tapes after 1972. His text in italics, with bold I have accentuated his text for our purpose about LRH disappearing in 1972:

There are no other lectures listed after this in the flag master list. The master list was distributed in 1978, but it may have been compiled earlier and its purpose was to locate old missing tapes.

There are some taped lectures after this but I do not have a complete list. There is a rumour that some of Ron’s briefings or instructions to SO members were taped. This might include orders for bulletins and policies to be written, etc. (but not simple orders – those came out daily in the Orders of the Day (OODs)).

This was a general message to Sea Org orgs and it had the peculiarity of having a general section and then a custom section that was specific to each org so that AO and ASHO versions, for example, have different custom sections. The tape was not very long and didn’t really say much of note (it pretty much matched info letters of the time period). It did not strike me as bogus (the later RJs did) and might have been the last tape actually recorded by Ron before he disappeared into Northern California.
— later tapes —-
The cassette “Books Make Booms” issued around 1980 was not a lecture by Ron, but simply a recording of various SO speakers at an event.
There were Ron’s Journal 36 to 39 issued in December of each year from 1982 to 1985. These don’t sound quite right and there have been rumours on the internet that these fail a voice print analysis and are not actually by Ron.
====================
[I recieved a note from an old Sea Org member about tapes after 1972. Apparently there were a few lectures after this and the flag master list simply used it as a cut off date. -The Pilot] Excerpts from the note (author’s name withheld) –
“Over 30 of us attended the Flag Bureau lecture (27 Sep 73) on board the Apollo.
“The 5 Sep 71 lecture “Talk on a Basic Qual” was only given to a small group in LRH’s office on the Prom Deck of the Apollo.
“There were other taped conferences – he did not tape orders, these were in the OODs (Orders Of the Day) which came out daily – early in the morning.
“Sometimes orders were issued on an FBDL (blue on white), only LRH wrote these.”

Take a look at the linked master list. The first dated lecture was on 7th June 1950, the last one in the original master list 7th April 1972. Between that are 7975 days and he gave 2956 lectures: in the average every 2.7 days a lecture. When you count the days to his alleged death and count the missing lectures every 2.7 days: Then 1867 LRH-Lectures are missing! LRH loved talking to his friends. This means also, that LRH stopped talking to such an audience since 1972.

The management claims a lot of LRH-lectures since 1973:

The Special Rundown given to a chosen few on Flag Ship, but these tapes are not available for the public. So we can only believe in them, not check them for authenticity. Then the different Rons Journals, as mentioned by The Pilot. But also they failed a voice analysis test and are not available any more in the Church.

After the Flag Master List was published in 1978, showing no LRH-lectures after 1972 – which is quite revealing – the book “What is Scientology?” (WIS?) was issued in 1979 listing all LRH-materials up to that date. Among the lectures you now suddenly find these: 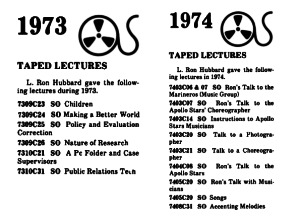 Also another 15 lectures which are not available.

And same as the Special Rundown Lectures, nothing in these titles seems to be confidential. Confidential lectures where not listed anyhow in the WIS?

So they create the idea: LRH is still living, still free and talking to us, when it is a lie. Why?

Because this idea is fundamental for the project to take over Scientology, the management and the subject and to rewrite the Bridge, so that no Clears and OTs are produced any more.

Don’t let your self so easily be cheated!