I just listened to this lecture by L. Ron Hubbard: 6905C29 First Standard Dianetics Graduation – The Dianetic Program and found a way to totally destroy Scientology & its Bridge:

Somebody gets up and he’s been ramming around and going into orgs and HGCs and so forth, and then we catch him at something on the order of OT II, and we read this and it says “he’s still trying to get rid of his injected eyeballs – he is gone to OT VI”, and “he’s gone to OT VI, and he doesn’t think he’s made it, because he still has a small rash on his nose, and he’s been trying ever since he got into an org to get rid of it,” …

And we taught the Class VIIIs that if you omit somebody’s Grades, he won’t make it. And what do you know, there was the biggest Grade of all had been omitted, and that was Dianetics. And with that Grade omitted, they weren’t making the Grade on up the line. Now you are going start to seeing people fly. …

In the first place, it means that when somebody gets their [Dianetics-]certificate, he can audit. Do you understand: that’s what a certificate is. There are two qualifications to a Dianetics certificate now. And those two qualifications are: has had case gains on Dianetics, and has been able to administer Dianetics so as to give case gains with it. And that is what a Dianetics auditor is. Is not somebody who has been through the checksheets a large number of times, or somebody who knows the Director of Certs and Awards [laughter]. And that is the tradition which we are beginning.

And then I took a look at the original Dianetic-Checksheet of that time in my possession and find this in the HSDC-Checksheet HCOPL 1 Dec 1969, update of 25 July 1969, which the Student completed in his org on 14. January 1971: 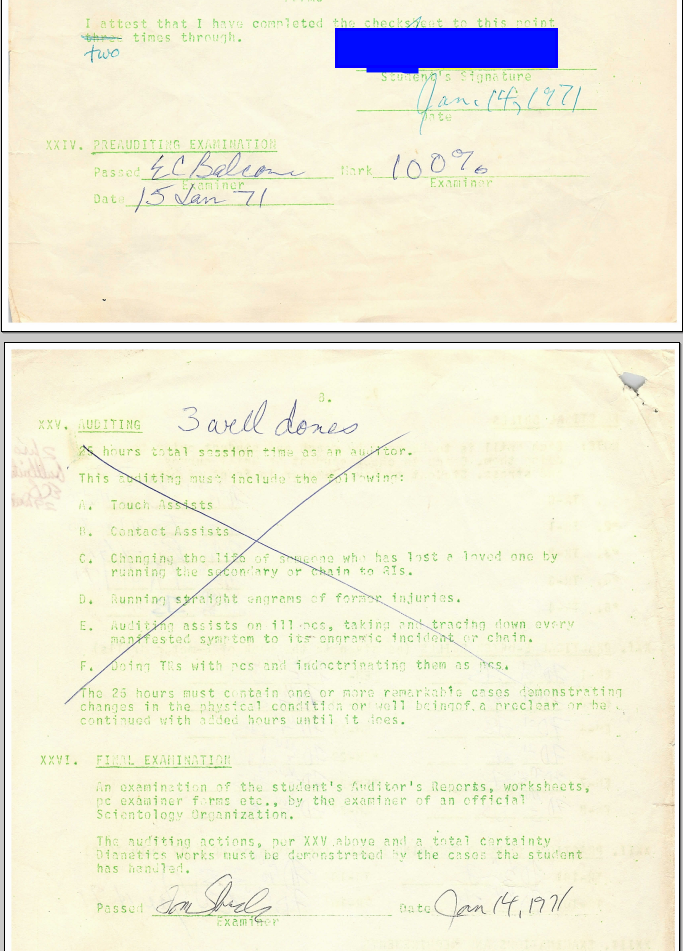 So instead to study the theory 3 times through, as LRH demanded in his checksheet, he was allowed to study it only twice. And instead of the following requirements, he just needed to deliver 3 well done sessions:

25 hours total session in time as an auditor.

This Auditing must include the following:

C. Changing the life of someone who has lost a loved one by running the secondary or chain to GIs

E. Auditing assists on ill PCs, taking or tracing down every manifested symptom to its engramic incident or chain

F. Doing TRs with PCs and indoctrinating them as PCs.

The 25 hours must contain one or more remarkable cases demonstrating changes in the physical condition or well being of preclear or continued with added hours until it does. [HCOPL 1 Dec 1969, update of 25 July 1969]

This quicky action was done a year after Ron warned us in HCOPL 7.2.65 reissued 15.6.70 KEEPING SCIENTOLOGY WORKING 1:

Note: Neglect of this Pol Ltr has caused great hardship on staffs, has cost countless millions and made it necessary in 1970 to engage in an all-out International effort to restore basic Scientology over the world. Within 5 years after the issue of this PL with me off the lines, violation had almost destroyed orgs. “Quickie grades” entered in and denied gain to tens of thousands of cases. Therefore actions which neglect or violate this Policy Letter are HIGH CRIMES resulting in Comm Evs on ADMINISTRATORS and EXECUTIVES.

It is not “entirely a tech matter” as its neglect destroys orgs and caused a 2-year slump. IT IS THE BUSINESS OF EVERY STAFF MEMBER to enforce it.

So these quicky actions,these high crimes denying case gain still went on in the orgs and although very obvious – as the checksheets had to be manually altered – where not handled by students or staff. 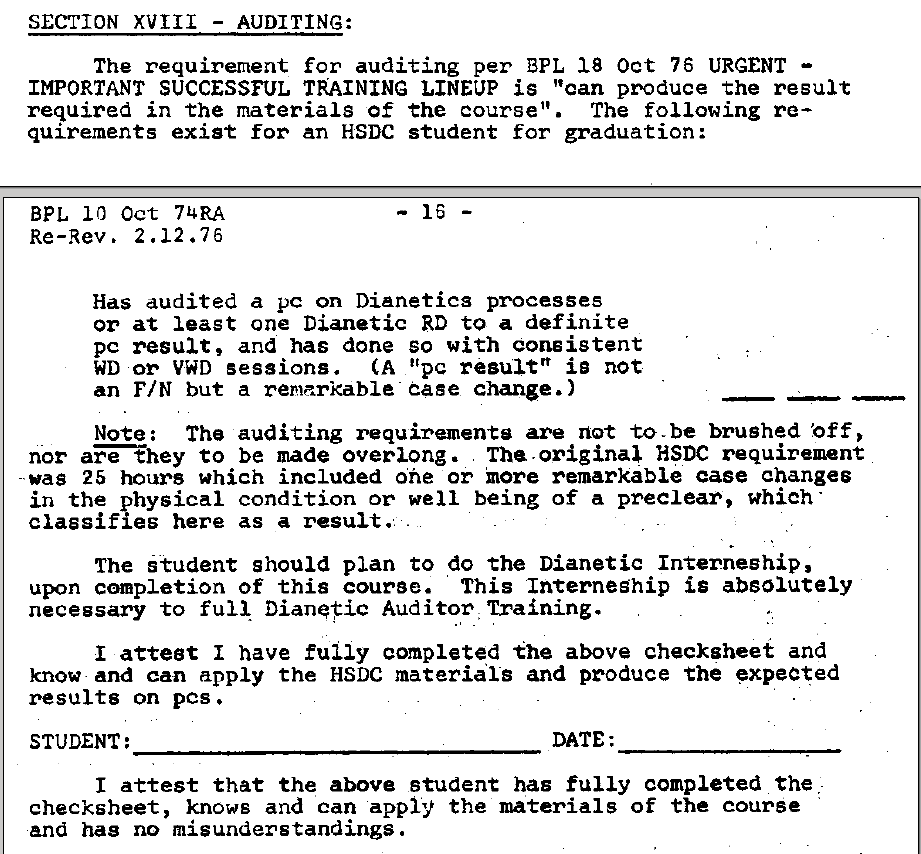 A few months later this was cancelled and replaced by BPL 31. March 1977 I Hubbard Standard Dianetics Course Checksheet, which gives even an easier requirement: 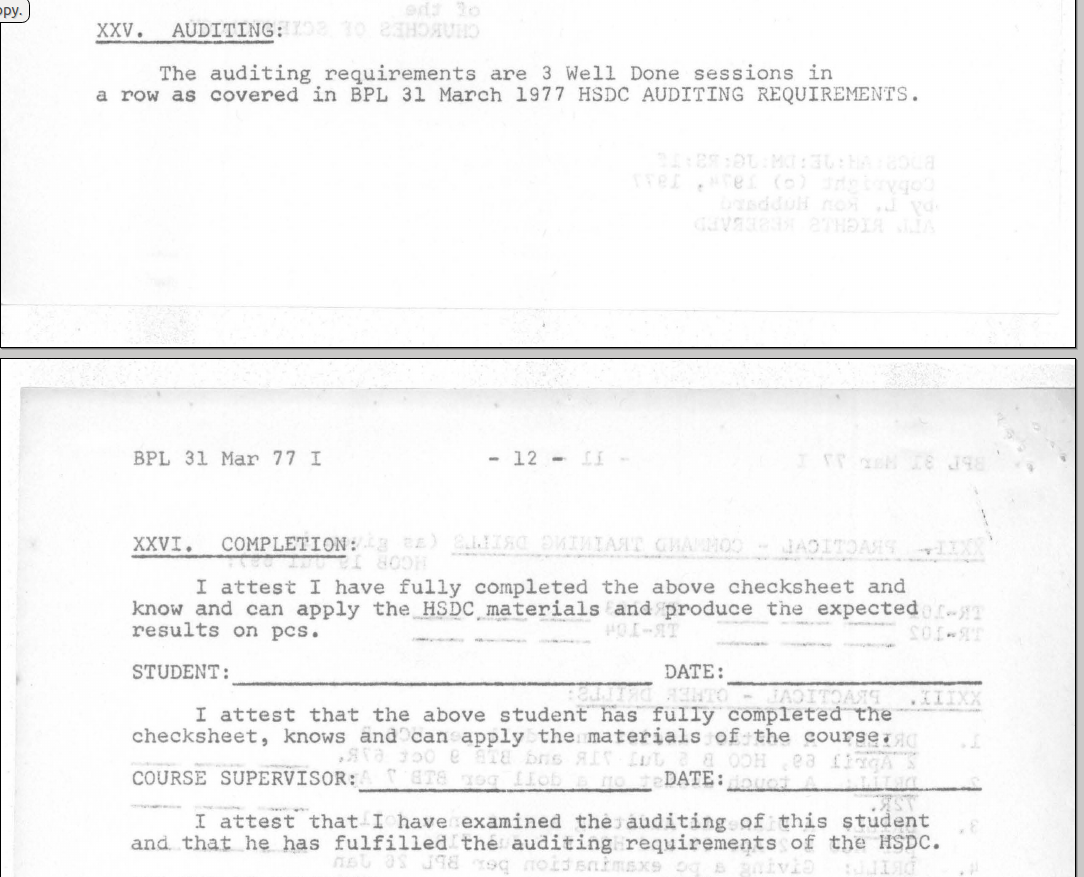 Not even any win or „a definite PC result“ (like a cognition VGIs, F/N) is needed, you just need to satisfy the C/S, that he can not find a fault in three sessions.

Compare that to the „two qualifications“ Ron demanded from us, before a Dn-Cert might be given:

No wonder, that nearly no Scientologist today is still delivering Dianetics Auditing.

And this is a safe method to destroy Scientology and its Bridge: just continue to skip this gradient: as an Auditor and as a PC.