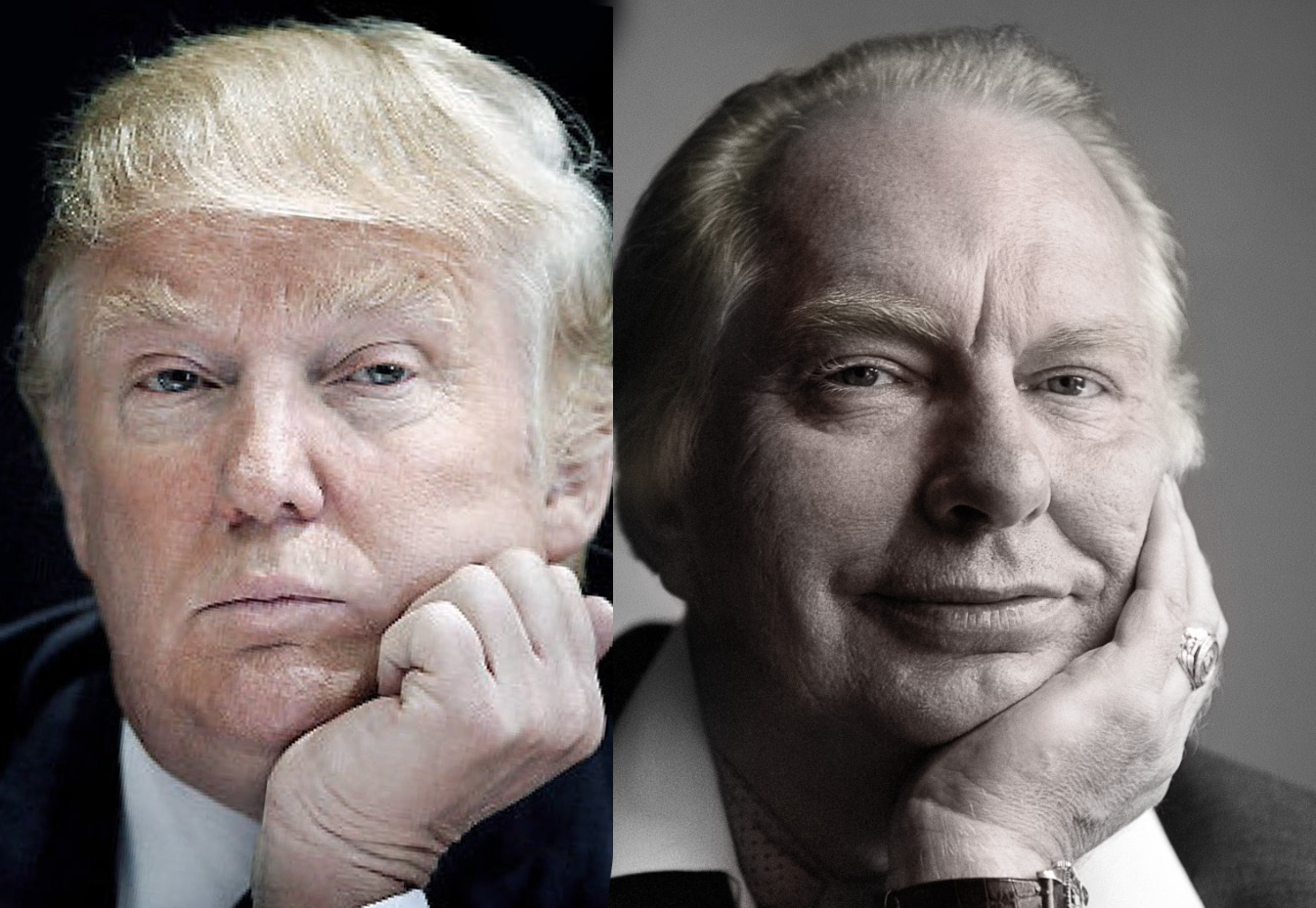 Normally I do not take part in a political direction on my Scientology blog, I do not advocate a party, because Scientology is impartial, should be open to people of all political colors, all faiths and all skin colors and ethnicities.

But where there is a policy, there are times of exceptions. The last exception to a US presidential rally was Ron’s call to stop Nixon: this was the HCOPL April 24, 1960, and the further development that culminated in the 1970s in the Watergate scandal and the Nixon Enemy List proved Ron’s ability for prophecy.

Of course, Scientologists as individuals can always interfere in politics, if they are after them. But this is an individual decision and is not “centrally controlled,” ie one may support this candidate or this party, and the other may support that. But it is quite different when Scientology as a group wants to intervene:

Scientology’s intervention in politics is not about the favoring of the right or left direction, not by a pro or contrary to the health insurance reform, etc. Our scale is the extent of freedom that politics offers us to achieve our goals. And regarding Nixon Ron had “the right nose”, he was right: Nixon had caused – as my previous blog article “The IRS operates against Scientologists” proved – the hostile takeover of the Scientology Church. Perhaps that would not have happened if we Scientologists had been more active against Nixon. Today we have another challenge:

Donald Trump was inaugurated last Friday to the presidential office and started to work. He is the first president since JFK, who has once again dared to interfere to the big politics. All the other US presidents since JFK saw themselves as marionettes, as just a political actor, as a trustee of the special interests they had sold them to: the Wallstreet and the Military Industrial Complex. They were not forced into this role by a painful process, but they had offered themselves, as a political actor, from the outset, voluntarily, and were trained and supported by CFR, selected by their party leaders, and led by the mass media to the success of the elections.

Donald Trump: he did not go through the high school of the CFR, he did not make a party career, his life was non-political but an economic one, and he was treated as an enemy by the mass media in his election campaign. No trace of any promotion or support by the media for him. Surprisingly, he did it anyway – or perhaps precisely because of it. On this and the other side of the Atlantic the people have become tired and have been sold out by the mass media as fools. They dissolve from this fatal influence, the reader- and audience- numbers are dropping steeply downwards, the economic existence of the mass media is at stake. This is also in line with a recommendation by LRH within the framework of Scientology Zero: for a few weeks refuse the consumption of newspaper or TV and find out, whether or not you feel significantly better afterwards. Ron not only asserts this negative influence of the mass media on our mental health, but also gives us a practically applicable process to make this fact experience-able for each individual: media abstinence.

Trump had to experience this negative influence on the hard way. One day before being inaugurated to the presidency, CNN had carried out a report on what would happen (with regard to the succession of power) if Trump was to die before the inauguration. No mass media has ever been allowed to such an impertinence with any other president. That already bordered on a call. There has already been a call to a regime change. Similar to previous “color revolutions”, most recently in the Ukraine, paid demonstrations against the elected were the prelude to violence, hedgehogs and ended in a coup. The Wallstreet and the Military-Industrial Complex fight for their status quo. Obviously they are not adequately represented by Donald Trump. 8 Years ago Obama was still able to promote in the election campaign with a void of “We are Change” and “Yes we can”. He still had the support of the mainstream and that should have made us equally sceptical. The oligarchy knew that, as a lawyer, he was simply acting as trustee for the position of US president on behalf of his financiers, that he would not interfere, did not really promote whistleblowers as he announced, reduce torture or reduce wars. He is the president with the highest ever statistics in the military field, “upstat” in homicide killing missions launched by drones, with massive “collateral damage” in the civilian population of countries to which the US never declared a war.

What makes me so sure that Donald Trump will be another president? It is the application of the data from the PTS-SP course: Trump is definitely a good guy, no 1.1. He “has his heart on his tongue”, meaning he says what he thinks. And he’s talking about survival. Like LRH, he utters opinion that politics is dominated by 70% of economic policy: “Life consists of seven-tenths of work. One tenth belongs to the family, one tenth of policy and one tenth of relaxation.Economic questions, the struggle for wages, covers seven tenths of human existence.Take a man’s income or his place, and he will usually find him in a bad state of mind. “(Ron in” Problems of Labor, “Chapter 1) The US was internationally hated for her imperialism, for her dozens of wars and 1.1 regimes changes in the years since World War II. We looked at the US military bases in 150 countries, the basis of the exploitation of the countries of the world by the US empire – documented by the foreign trade deficit of several billion USD every single day. Goods and services were simply paid with Fake Money from the FED: worthless dollars created out of thin air, for which the US intended to bring no exchange.

What I have overlooked in my hostility against this US Empire: Only the Wallstreet or the City of London have benefited from this development. The real economy of America itself has been destroyed: in the framework of free trade ideology, the real production was out-sourced: to China, to India, to Mexico… You can go shopping with fake Dollars. Thus not only the jobs are lost, but the whole US industry is nearly broke. So out-exchange revenges itself, one can not continue to operate without penalty forever. And the people are always taken collectively for the crimes of their government and their oligarchy. This was not different after the Hitler regime. The European people suffer from mass immigration (“refugees welcome!”) as their motivator for the criminal wars (without UN mandate in Jugoslavia, Afghanistan, middle east) of their national governments at the side of the US empire. You harvest what you sow.

For me it is definitely 5 to 12 concerning the imminent crash of the world fiat currencies. All Western currencies are dollar based, have been “liberated” from any gold cover. The dollar is likely to crumble in 2017, ie other countries – especially BRICS – will refuse to allow themselves to continue to be paid with fake money or trust the bonds of the United States. The dollar will also tear down the euro and the swiss franc, the British pound etc. Our economy will come to a standstill as it is unclear how to exchange without respected money. There will be a global tussle about which new currency (eg new Fiatmoney from the IMF?) Will be used as a base for the world trade. The BRICS, on the other hand, have bought in the past decades an incredible amount of gold. It is likely that in the future they will require to be paid with a currency that has substance. It is unlikely that they will again accept a currency that can be created out of nothing by world oligarchy (London City or Wallstreet) and continue to redistribute real values ​​from the industrious to the rich.

Donald Trump, a self-made man and a multibillionaire, has behind him this part of the American oligarchy, which can not expect any profit from further war strategy (Hillarys friends profit from war, but 80% do not). His strategy is to bring back the real production to the US itself, to get the jobs back. This is not what is called “populist propaganda” – as often is assumed, he does this not out of love for the working class or the “white middle class”, but this is the only correct handling of the condition of Danger for the US economy and politics: to get in ethics and this means first of all: to produce the goods that are consumed in the country. In view of the forthcoming dollar crash, this is the only working strategy. For all stakeholders involved. Even the military-industrial complex knows that they can not threaten wars to extort more billions, if the troops can not be paid with a hard currency. No soldier will stay on post for another month, if his salary in USD is not recognized as a value anywhere in the world. So Trump is supposed to lead the USA out of the Danger and has behind him some parts of the oligarchy, which has decided to reduce the corruption (step 4 of the Danger formula: Handle the personnel by Ethics Investigation and Comm Ev. ) And the national production again (Step 5: Reorganize the activity so that the situation does not repeat. ): “Buy American products, hire Americans” is Trumps motto. This is not some populist phrase, but the correct policy that is required in step 5 of the Danger Formula.

In the last weeks Telse and I have read 5 books from Trump. Four of these were written in the period when there was no intention of a political mandate. Ie these books were not written as political propaganda, but they give a deep insight into his way of thinking and philosophy. And we must say that an amazingly high amount of his teachings align with the teachings of L. Ron Hubbard. This does not necessarily mean that he has studied Scientology, because Hubbard’s insights only describe natural laws, which are known intuitively by every successful person.

Well, this post is a little late, to be able to influence the election of Donald Trump. – So what is my purpose of this post?

The US president can not do the job alone. The success of his efforts depends on whether he is able to get people to do the right steps now. And we know, the steps of the Danger Formula (per HCOPL 9 APRIL 1972 CORRECT DANGER CONDITION HANDLING) are necessary to survive through the coming crisis:

With the slogan “Lock her up” he is on the right track with regard to step 4.

Many people have become tired of politics. They went down the tone scale to hopelessness and apathy. For them, Trump is just another politician who wants to talk to them but only thinks about his own interests. This apathy, this bank, the A = A = A = A-thinking about politics and politicians could be the rock on which the efforts Trumps fail. We must now mobilize all resources. Everyone on his post: Businessmen have to raise their production and create as many, qualified and productive jobs as possible, lawyers, law enforcing officers and judges have to bring back ethics, ie break mafia structures and corruption in politics and society, we all must counter the mass media propaganda with our word-of-mouth. Guidelines for Scientologists are the OEC of LRH, above all a smart application of the Danger Formula to the current situation.

The question is not what US President Donald Trump can do for you, but what you can do for your country (free after a speech by JFK).