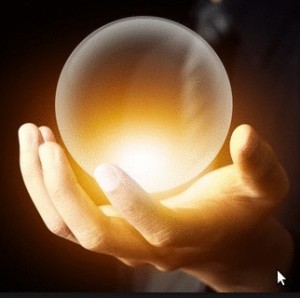 I could read minds and foretell the future with great accuracy. Such accomplishments startle people and I early learned in this lifetime to keep my own actual abilities to myself or else find sociability impossible.

Usually he did not show this OT-skills, but there is one proof of it here:

Once upon a time there was a man, or perhaps he was not a man, who slept for a very long time.

When he laid himself down to rest, the world was not too terrible. People were happy and their actions were productive and the green hills had flowers upon them.

When he awakened, however, things had changed. He stood outside his cave and looked at the world. Yes, somehow it had changed. The hills were ugly and brown. Near at hand two women were quarreling. Far away a red cloud rose and when he looked more closely he saw that it was a battle. And so he walked down through the fields and towns trying to find what had happened.

Men glowered at him. Children did not play. And there was little food and the haggard faces of all showed that each staggered under some heavy burden of grief. And the man, or perhaps he was not a man, saw that the world had come into trying times.

He wandered about, understanding that here he faced a black enchantment, thickly laid upon the souls of men. Perhaps some sorcerer had done it to men, perhaps men had done it to themselves. But it did not matter. The world had gone mad. Somebody must do something.

The man thought for many days. And then he made a golden ball and filled it with everything necessary to undo a black enchantment. It was a very pretty ball, on the end of an ivory stick. And it was very easy to use for one had but to hold it over the head of a human being and wish him well to break the thrall which held that being.

And the man went forth and held it over the heads of dozens of people and did not tell them what it was and they suddenly smiled and became bright and the thrall was broken for them. And the man saw that this was good and so he showed many people how to use the golden ball and told them all that was necessary to break the black enchantment clear across the whole world.

And some used it. But others said, “Isn’t it pretty! ” and began to play catch with it. And some said, “It isn’t really gold.” And some wanted to hide it for fear it would be stolen. And some said, “It’s GOLD!” and bought knives and pistols with it and fought. And some said cunningly, “With this POWER I can rule Earth.” And others simply ran about and said it wasn’t really a ball and that the man had stolen it from others and they clutched their black enchantment about them and whispered that the man had done it in the first place and that he planned to kill them all.

But the man paid little heed. He tried to form companies to make the golden ball available to many. But the people in the companies said, “It’s mine!” ‘It’s power!” “It’s gold!” and “The man will kill us all!” and so they fought amongst themselves and threw dust over the golden ball and tried to dent it.

And at last the man sat down in a desert place and sent his word about that anybody could use this ball that wanted it. And they sent officers and thieves and lawyers at him to say that nobody could use the ball.

And they took the man’s captain and said they would imprison him for saying the golden ball was owned by everybody. And they made the government put guards around the man in case anybody sent him money to help ship the golden ball to everyone.

And the man looked at these people and not one of them who hated the golden ball had ever used it in any way but only thrown dust on it and tried to dent it and he looked at the sly people who went up and down the roads saying, “It is not really gold!” “The man really stole it,” and then he looked and saw beyond these the haggard faces, the crippled children, the sorrowing women. And above all these he saw the red cloud of the battle.

And the battle cloud grew taller. And it grew taller and taller as though it hung with fire up above an entire world.

And the man, sitting in the desert place, looked at the golden ball.

So he knew in advance, that his wife would be imprisoned and that he himself would be isolated by government from his friends.

As the official History of LRH by RTC tells us, that LRH stayed free up to his death in 1986, this contradicts his version. As we know today, that Scientology got in bad hands we should research and discover, when that started and by whom. This website proves, that it started in 1972 and was not done by the young David Miscavige at that time, but by IRS, CIA, FBI and other such criminals with vested interest to held down Clears and OTs and grab the tech of “remote viewing” for themselves.

It is nice to have Rons version of his whereabouts in the last days of his life, to support the claims made on this website.